The Delta des Refuses event at the Laman Library – Argenta branch is a special exhibition showcase for artists who were not accepted into the 57th Delta Exhibition at the Arkansas Arts Center (a vast majority of the works entered were passed over). This show is inspired by the original 1863 Salon des Refusés held in Paris. Featured artists included Manet, Cezanne, Pissarro, and many others who are now widely recognized as masters of their time.

I was one of the artists not accepted into the 57th Delta Exhibition at the Arkansas Arts Center. Typically, I would not feel the bitter rejection – I submit a lot of work to a lot things and get a lot of rejection letters and emails. However, when I found out that George Dombek was serving as the juror, I was disappointed. My grandmother was married to George Dombek’s brother for forty years. I have never met George that I can remember – it wasn’t like close family or anything – he most likely does not even know who I am. I didn’t become an artist because he was an artist or anything like that. But I thought that would be a kind of cool way to meet him (indirectly meet him), through him viewing my work. Alas, it is not our time yet to meet. 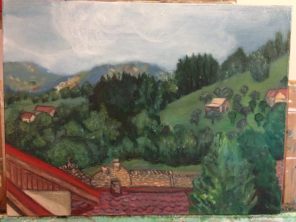 When I first received the invitation to the Delta des Refuses exhibition, I didn’t want to participate because I didn’t want my artist peers to know I had submitted and was not accepted. The more I thought about the exhibition however, the more I was encouraged that there was an opportunity to show my “rejected” work. I also was curious to see what other pieces and artists were rejected.

We went to the opening and there were so many people there. We even ran into some friends who were enjoying the art. 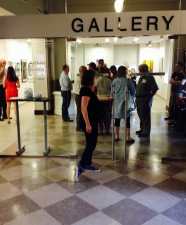 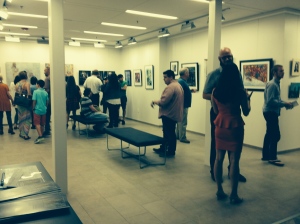 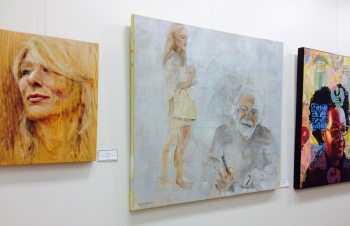 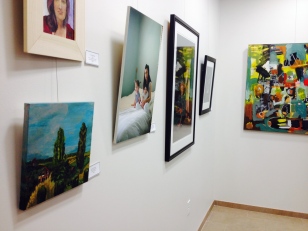 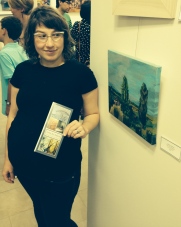 The show will run through October 16, 2015 at the Laman Library – Argenta branch.