A musician’s practice schedule is a very personal thing. Everyone has their own expectations and motivations for practicing their instruments. In this post, Micah shares his practice routine.

Micah records parts of his practice so that he can hear where he needs improvement. 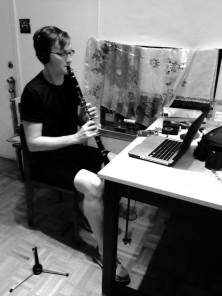 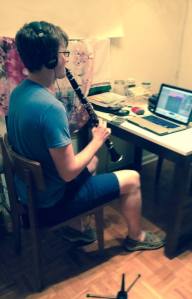 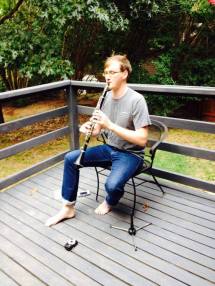 Here is a sample of what Micah’s practice generally sounds like.

Micah Sukany is one of the creators at Paper Opera. He mostly works on the music side of things, though he does write as well.

Who are you and what do you do?
My name is Micah Sukany. I am one-half of The Damsels in Distress. I also write and record music that doesn’t make it as Damsels pieces. I didn’t self-identify as a musician until late last year. When the Damsels started getting money for pieces we recorded for a radio show, I thought, “Okay, I should probably take this seriously.”

What is your music process?
I work best and most often by recording. When recording,  I have a musical idea and quickly document that. I generally work from those early, recorded fragments. I think the best things I’ve come up with is when I heard the part before I ever played the part. For “Father Priam” I heard that in my head in its entirety and I had to learn to play it – that’s the first time that’s ever happened. 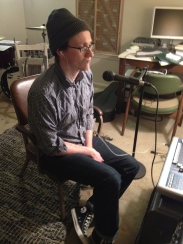 Recording vs. performing?
Recording is exciting because I work to build upon layers, and I can hear everything. When performing I have to concentrate and be mindful of what I’m doing, so I don’t have time to enjoy or even listen. I’m just focused on keeping the tempo and playing the songs. 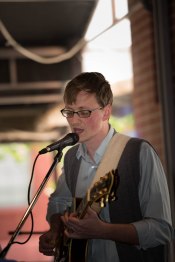 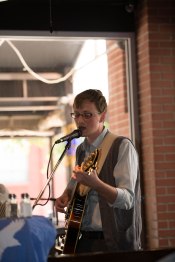 What is the biggest challenge of creating music and how do you deal with them?
The biggest challenge of creating music is finishing when I lose interest. I haven’t really figured out how to deal with this, so I have a lot of unfinished work. It’s hard to keep going, practicing, working, and reshaping something to be perfect when I lose interest part of the way through. That is a big struggle.

What do you like about your work?
I like that my work is mine. I write it to please myself. I have always written music for myself. I have always been my primary audience. If I don’t like what it sounds like, then it’s probably not that great. I like to make it. I like that I’ve made it. And sometimes, when it’s a song from a dream, I like to listen to something that came from a dream.

I like that me and L.K. make it together, that it is our music. I like it when people say, “that’s nice,” or “I liked that.” Also, when I hear our music in a recording or video, I think it sounds magical, and I like that we’ve created something mysterious.

What inspires your work?
I got tickets to the Arkansas Symphony Orchestra’s performance of Mahlers 5th. After that I was pretty fired up to do something better or different. It’s in the music we wrote for KUAR Arts and Letters Father’s Day show. Also, I wrote all of the instrumental recording for “Grown Ups” on the album “Spinning Plates” immediately after watching the Herzog film “Stroszek.”

What are your favorite inspirational places in Arkansas?
I like both the Big Dam bridge and the Two Rivers bridge. I also like driving quite a bit – the drive from Greenbrier to Harrison on 65, Little Rock to Stuttgart on 165, and I40 to Memphis are all great drives.

Who are your musical inspirations?
I really like John Lurie, the Lounge Lizards, and Fela Kuti, Africa 70, The Lovers (they are genuine and earnest both qualities I enjoy), Tasseomancy has a great aesthetic for me, and I’m always going to like folk music and European folk music.

I have always been a big fan of Subpop’s Mudhoney. Mudhoney has always been making the same kinds of music since their 20s, and they keep doing it because they like it, and I’ve always admired that they do what they like. I’ve always admired the people that played on Hearts of Space. I always thought Steven Reich was pretty smart. Like, one idea is interesting for the whole piece.

When I think about what a good band should sound like, I think about Beethoven’s 5th symphony. Some times it’s just a single note played in a particular rhythm – just letting things be simple. Not an accompaniment pattern – just simple, like what needs to be there. It’s elegant. That’s what I think for musicians that are professionals.

What is integral to the work of a musician?
I think the audience is the number one important thing. You can be your own audience. The idea of the rock star or professional musician has distorted what musicians are in a community because they become the sellers of commodities, opposed to storytellers or someone that creates a space in which something happens. If you look at a healthy music community, like bluegrass or classical, the musicians are just as much their teachers and their students. Their identity is connected through other musicians as something they have received and as something they are passing on. The rock star doesn’t give anything in that sense, they just make money.

Discipline and a steady, stable process. The music process involves a lot of listening, internalizing, and applying in new contexts.

And he likes to read poetry!

What is your strongest poetry memory?
I went to a poetry reading at Juanita K. Hammons Hall for the Performing Arts in Springfield, Missouri. Up to that point, I mostly read poetry and didn’t realize that I was missing the sound or music of poetry as well as its drama. It didn’t hurt that the poetry was read by some award winning actors of the stage and screen.

Poetry has been definitive for me. I spent three or four years in undergraduate reading it almost exclusively. 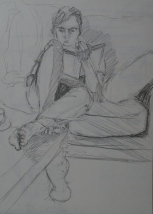