The Damsels in Distress spent time with our friend and drummer Chris Hickey to write, perform, and record the instrumental album Tea.

We first put together Tea as a set for performance during the opening for L.K.’s Wildwood Art Exhibit. Previously Chris had told us that classic story about an acolyte, a tea cup, and a zen master. Well, that got us all started. Percolating on a few phrases, we eventually found fuller tunes during several rehearsals in July. We ran through the set in August and thought we were finished. 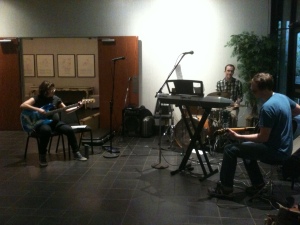 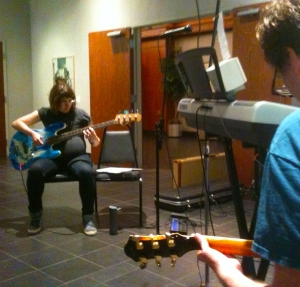 However, thinking back we all wished we had recorded that night. We later decided it would be best to record the set as a themed album– just for the record. We set the evenings of a September weekend aside, played through the tunes, and here we are.

This album was recorded differently for us. We used multiple microphones on the amps and drums and tracked everything simultaneously. Once we had the multiple takes recorded, we transferred our favorites -mistakes and all- to a laptop. In late December, we mixed the raw recordings in Garageband and here we really are.

Tea. It’s had time to steep. It’s a strong brew. We like it and hope you do too. You can listen to the album on The Damsels in Distress band camp page.