I met Neal at the Arkansas Arts Center where we competed in the first round of the Portrait Face Off. It was super awkward meeting an artist and immediately competing, and we both acknowledged the oddity of it from the beginning. While we were waiting to be judged (two women walking around with notebooks whispering to each other), I was able to meet Neal’s artist wife Tammy, who also was competing. Neal won the competition and we parted ways – only to be reconnected the next day in the Sunday morning Arkansas Democrat Gazette. They recaptured the intense and awkward battle of our portrait face-off, and we looked so regal in our drawing stances!

I Facebook friended Neal after that, and have enjoyed all of his news feeds of creativity.

Neal Harrington’s Art Studio – Neal’s studio is a shared space with his artist wife Tammy Harrington. Neal writes about his studio below.

“My studio is in the basement of my house and is crazy messy. Organized chaos. I do clean it sometimes but then I am utterly confused!” 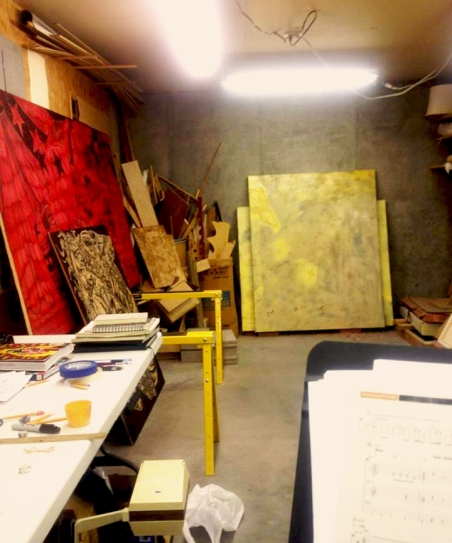 When I commented on the fact that there were instruments in his studio, he replied, “Yes, I can be very loud in there!”