When I was on the missions trip with Grace Church serving the Livada Orphan Care ministry in Romania, the beauty of the country inspired me. I had the idea that when I got home to Arkansas I could paint these Romanian scenes and donate the paintings to Livada to raise money for orphan sponsorship.

Our group went to the Shinkai house and it was amazing! The family who fosters some of the orphans was so welcoming and showed us around – on the outside of the house, there were cats, dogs, rabbits, pigs, and chickens. On the inside there was a wall full of drawings and paintings that the kids had made. 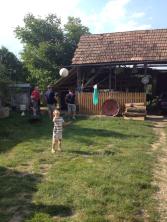 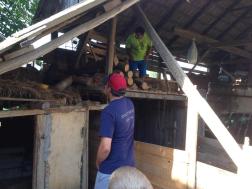 As we were leaving, a man on a horse cart passed us by and we jumped on his cart for a picture. 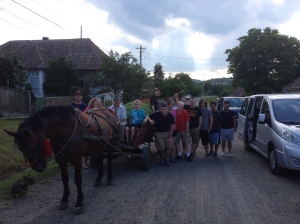 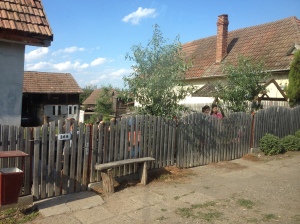 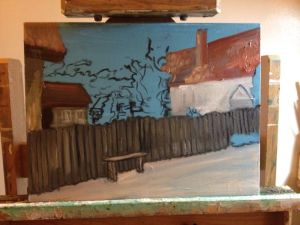 A couple of weeks ago I was asked to create a logo for a local chicken coop rental called Fresh Eggs 4 U. This is the logo – which she designed and I created.

I asked if L – the owner, was interested in trading something for the logo. She said she would trade a chicken – to be more specific, she would trade for a silver laced Wyandotte that is about 10 months old.

This is the chicken – which is from Dragonfly Farm

The chicken, which I named Ms PotPie I received at 7:00 a.m. in a small cat crate. Since it was M.R’s birthday, we decided to take the chicken to her for her best birthday present. M and I drove Ms. PotPie to M.R.’s house and entered her house at 7:10 a.m.

Since it was M.R’s birthday, S.R. brought donuts!

And M.R. opened her handmade card from Paper Opera! 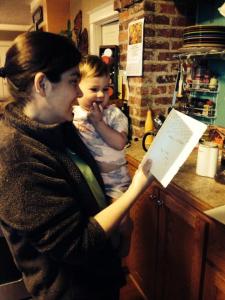 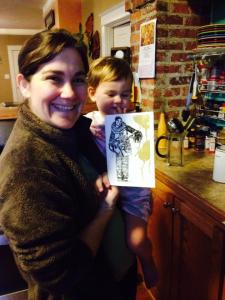 We got to it and introduced Ms. PotPie to her new chicken roommates – Mole, BBQ, and Dumpling. 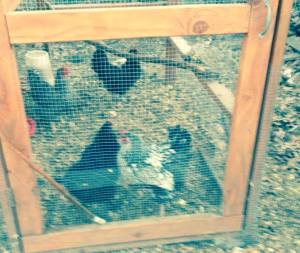 Everyone waited anxiously to see how it would turn out. Would Mole, BBQ, and Dumpling like the new Ms. PotPie?

The anticipation was building!

Mole, BBQ, and Dumpling decided they had to get out of there and check out the box that Ms. PotPie came in – leaving Ms. PotPie alone in the corner of the coop. 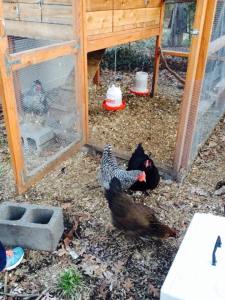 So, in the end, maybe they didn’t fall in love with her right away, but Ms. PotPie was left getting cozy in her new coop!

And that is the adventure of the artist and her pullet!